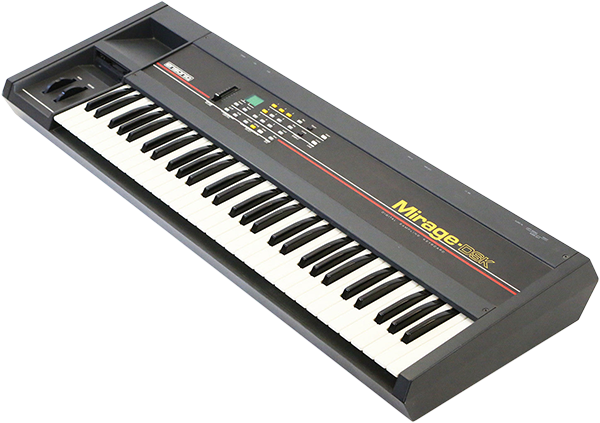 The Mirage uses digital oscillators (ES5503) combined with analog low-pass filters (Curtis CEM3328) to emulate acoustic and electronic instruments. While its sound engine and sample memory are extremely limited by today's standards, the Mirage was groundbreaking in that it offered that capability at an affordable price. In a market where instruments like the Fairlight CMI and NED Synclavier sold for the cost of a small house, its $1,695 asking price put sampling technology within reach for a wide range of artists and producers.

The Mirage uses a hexadecimal interface, which may be unintuitive for users unfamiliar with that programming language. However, the Ensoniq Factory library provided a wealth of usable sounds out of the gate, and a wide range of third-party sample libraries were created in the years following its release. The Mirage has been used by Babyface, Bobby Brown, The Boys, The Cure, Derrick May, Janet Jackson, Jimmy Jam, Karyn White, L.A. Reid, Mac Band, New Edition, Paul Hertzog, Pebbles, Prince, Sheena Easton, Skinny Puppy, Stacey Q, Terry Lewis, Thomas Dolby, Vangelis, and the Whispers among others.
‍
This page contains sample libraries for the Mirage in IMG format for floppy drives, and HFE format for HxC floppy emulators. All archives are complete collections, checked and labeled for accuracy. Many thanks to R-Massive/Cellarseer for compiling the Ensoniq factory library and SoundProcess files on their Mirage page, which I've included in this archive. Please note that these sounds require the original hardware to play.

We're looking for the following sample libraries for the Ensoniq Mirage:

If you have any of these samples (or any sounds not listed here), please send an email to:

OmniFlop is able to extract IMG files from Mirage floppies:

The Soundprocess OS is an alternative operating system created by Mark Cecys which can be booted into the Mirage to transform it into a multi-timbral synthesizer.

The HxC floppy emulator is compatible with the Mirage, and is an essential upgrade to its floppy disk drive: